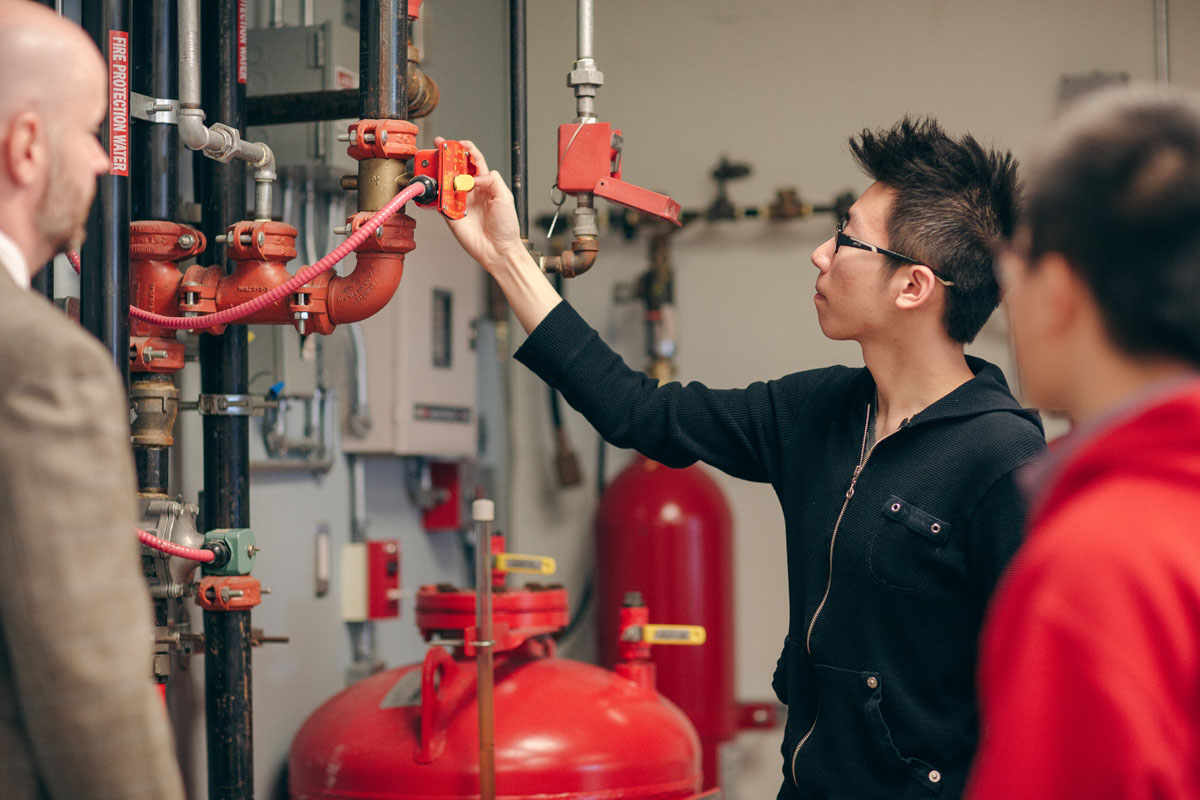 Age upon entering program: 18
Program completed: Fire Protection Engineering Technology (FPT)
Graduation year: 2013
Originally from: Oshawa, Ont.
How long did it take to get hired? One month
Positions held: Fire Alarm Technician, Toronto Fire Inspector
Coworkers who are Seneca graduates: Lots! It’s more common to be a Seneca graduate working with Toronto Fire Services than to have received education from somewhere else.

“I chose Seneca because it has the best program and education you can receive if you want to be in the fire protection industry.”
- Jessica Brown, Fire Inspector, Toronto Fire Services

Age upon entering program: 18
Program completed: Fire Protection Engineering Technology (FPT)
Graduation year: 2016
Originally from: Pickering, Ont.
How long did it take to get hired? Received three job offers prior to graduation; started work one month after graduation
Positions held: Sprinkler Designer, Project Manager
Coworkers who are Seneca graduates: More than 10, two of which are the president and vice-president of the company.

“Courses are taught by many experienced professors who have worked in their respective industries for many years and know what is necessary for a new graduate to be successful.”
- Dylan Pratt, Sprinkler Designer and Project Manager, Northstar Fire Protection of Texas

Age upon entering program: 23
Program completed: Fire Protection Engineering Technology (FPT)
Graduation year: 2019
Originally from: China
How long did it take to get hired? Hired prior to graduation
Positions held: Code Consultant, Fire Prevention Officer
Coworkers who are Seneca graduates: About 14, which is more than half of my coworkers!

“My fellow classmates and I had a great experience in our co-op that we will always remember. The feedback from both students and the fire industry is always very positive.”
- Qia (Emma) Wang, Fire Prevention Officer, City of Brampton

Age upon entering program: 19
Program completed: Fire Protection Engineering Technician (FPN)
Graduation year: 2018
Originally from: Saskatoon, Sask.
How long did it take to get hired? I was hired by Lifeline Fire Protection Inc. while I was in my second year of the Seneca program (2016).
Positions held: Junior Estimator, promoted to Project Manager within one year and promoted to Vice President of Operations by my second year.
Coworkers who are Seneca graduates: I currently work with four Seneca grads; our Purchaser, two Fire Alarm Technicians and our Life and Safety Specialist. We also work with Seneca to bring co-op students on board. So far, we have worked with one student who worked with the design and engineering team.

“I knew this was the program I wanted to take since I was in Grade 10 and I never changed my mind. I was hired by the first company I contacted after my first interview. My boss was so impressed with the knowledge I had already gained from the program, he hired me on the spot. I worked part time through the last few months of school and moved to full time when I graduated.”
- Victoria Wensley, Vice President of Operations, Lifeline Fire Protection Inc.

Age upon entering program: 20
Program completed: Fire Protection Engineering Technology (FPT)
Graduation year: 2020
Originally from: Toronto, Ont.
How long did it take to get hired? It took five months to get hired (during COVID-19 pandemic)
Positions held: I started as Fire Alarm Technician, and now I am a warehouse supervisor for a fire protection company.
Coworkers who are Seneca graduates: I work with seven other Seneca fire protection graduates of the same year.

“Seneca was a continuation of my love of saving lives. I was a lifeguard while attending school and, if there was one thing I learned from both experiences, it was to be strong, patient and caring towards every single person I meet. That is the kind of person I will continue to be for the rest of my life.”
- Andreah Khedher

Age upon entering program: 33
Program completed: Fire Protection Engineering Technician (FPN)
Graduation year: 2018
Originally from: St. Lucia
How long did it take to get hired? I was hired at the start of my final semester but started working upon graduation.
Positions held: Lead Fire Alarm Technician
Coworkers who are Seneca graduates: I know of approximately five. However, there may be many more at my company that I have not met or not aware they are Seneca Fire grads.

“Seneca is very serious about ensuring that all their graduates get employed. I was hired an entire semester before I graduated; all thanks to hands-on lab experiences, co-op, networking, and events such as the Annual Career fair and the Annual FPSA Dinner.”
- Andy Williams.

Age upon entering program: 21
Program completed: Fire Protection Engineering Technology (FPT)
Graduation year: 2020
Originally from: Toronto, Ont.
How long did it take to get hired? One month and a half before end of school year in April 2020.
Positions held: Designer
Coworkers who are Seneca graduates: My design supervisor is a 2005 Seneca Alumni and I know at least three others who are recent Seneca graduates in our office. I recall when I worked in Calgary, the President and Vice-President were Seneca graduates as well. We used to chat about school experience in the car on inspection days.

"The level of energy and passion from faculty for students to succeed is amazing. Their doors were always open, eager to share their experience as much as they can for approaching students. The vibrancy within the program is what motivated me to build a foundation of knowledge for the industry."
- John Lee