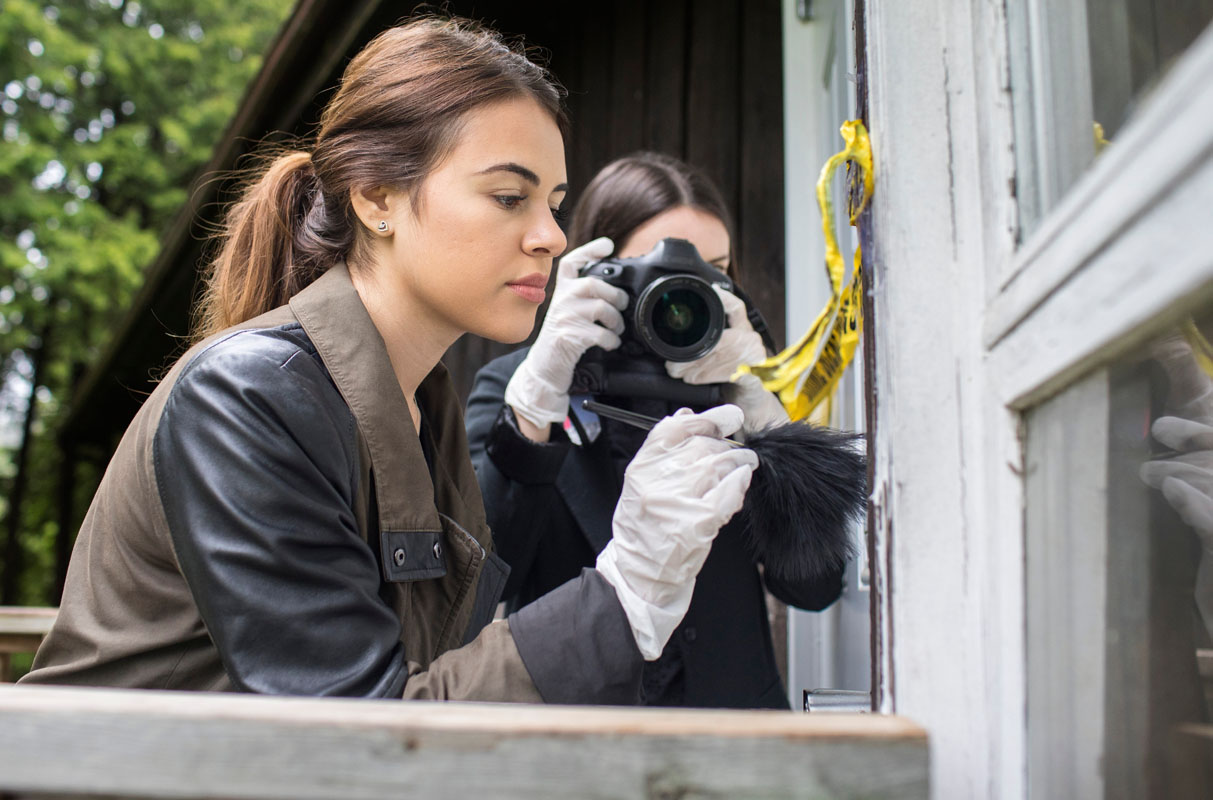 Bethany Kopel is a professor in the Honours Bachelor of Behavioural Psychology degree and the Behavioural Sciences diploma program. She is a Board-Certified Behaviour Analyst (BCBA) and holds a master’s degree in applied disability studies specializing in applied behaviour analysis from Brock University and a bachelor of arts degree in early childhood education from Ryerson University. Bethany has been practising behaviour analysis in the community for more than 17 years. Specific areas include the Intensive Behaviour Intervention program, community-based behaviour consulting for children and adults with developmental disabilities including dual diagnosis, and development and clinical supervision in the Ontario Autism Program.

More recently, Bethany’s focus has been on the application of behaviour analysis in services for older adults diagnosed with dementia in long-term care with the Behavioural Supports Ontario initiative. Bethany is passionate about the cross-sector application of behaviour analysis, including application in the education system including early childhood education, business and organizations, as well as in the health care field, specifically behavioural gerontology and dementia care.

Dr. Camie Condon began her career as an investigator for the Public Defender in Washington, D.C. and has been involved in education and training at several Ontario colleges and institutions for almost 20 years. She has worked as a senior researcher at iBrabo, a Canadian-based open source intelligence research group, and as a crime analyst with a regional police service providing analytical support to investigators and uniformed officers.

Camie has been a part of several research projects including one with results published in Global Crime, Crime Analysis and cognitive effects: the practice of policing flows of data (Sanders, C. and Condon, C. 2017). Dr. Condon has also presented research on Using Open Source Intelligence in Assessing Potential for Violence by Foreign Fighters to the Association of European Threat Assessment Professionals in Helsinki, Finland and designed training scenarios with Firearms Training System (FATS), FX Marking Cartridges – Simunition, and SetCan Stress-Vest. Her blog post – ISIS Targets Blackberry Channels — was subsequently published by the Terrorism Research & Analysis Consortium.

Camie is a recipient of YWCA Woman of Distinction – Education, Training and Professional Development Award and the Wilfrid Laurier Teaching Excellence Award. Dr. Condon holds a master’s degree in Investigative Psychology and a PhD in Psychology, specializing in tactical decision making by police during armed confrontations, and she coordinates and teaches in the Honours Bachelor Crime and Intelligence Analysis program at Seneca.

Cliff Aguiar is a professor in the School of Public Safety, where he teaches in the Honours Bachelor of Crime and Intelligence Analysis (CIA) program and the Police Foundations program. Cliff holds a master of science in criminal psychology, an undergraduate degree in psychology and criminology with his research interests centring around the experiences of LGBTQ2+ police officers in law enforcement.

For years, Cliff has supported members of Pride York; the AIDS Committee of York Region; Parents, Family and Friends of Lesbians and Gays (PFLAG); and Serving with Pride, a national organization of law enforcement professionals promoting diversity. Cliff's work led to the first York Regional Police pride flag-raising at headquarters in 2015. He also organized a day-long training on LGBTQ issues and Zero Discrimination Day.

Cliff is a highly proficient criminal intelligence analyst with experience in analysis within the realms of tactical, strategic, administrative and operational police operations. In addition to working in several high-profile criminal investigations, Cliff is an expert in real-time operation centre development and leveraging communication strategies within law enforcement. He has worked in various areas including Eastern European Organized Crime intelligence, frauds, drugs and vice, robbery and as a tactical analyst specializing in analysis break and enters and crimes against persons.

Cliff was one of the team members who developed the CIA degree at Seneca and has been awarded in the past for his innovation within policing services. This includes the Civilian of the Year award for his contributions to the LGBTQ2+ community and the Deb Young Crime Analyst of the Year award. Cliff has also pioneered the development of a crime analysis partnership with South Simcoe Police Service as part of the degree

Evangelo Boutsis is a full-time faculty in the Bachelors (Honours) of Behavioural Psychology degree and the Behavioural Sciences diploma programs. Evangelo is a Board Certified Behaviour Analyst (BCBA) and has been practicing Applied Behaviour Analysis (ABA) in community-based settings for the past 15 years with a variety of populations such as autism spectrum disorders/ developmental disabilities, and dual diagnosis. He has held a variety of clinical roles and has worked with provincial ministries as a policy analyst. Evangelo was involved in developing policies, guidelines and reports related to the practice of ABA in Ontario. He primarily teaches courses on topics such as introduction to applied behaviour analysis, behaviour assessment/intervention, ethics and behaviour analysis, and policy and legislation.

Kelly Alves is a full-time faculty member in the Behavioural Science diploma program. Her teaching expertise lies in the areas of research design, and behavioural interventions for skill acquisition and behaviour reduction.

Kelly has more than 20 years community-based experience designing, supervising and assessing behavioural programs for individuals with Autism Spectrum Disorder and their families. Kelly has a Master of Education from Brock University and is a Board-Certified Behavior Analyst. Her research interests include parent education, staff training and curriculum development.

Dr. Laura Berk has more than 20 years of experience in the field of counselling adults diagnosed with mood and anxiety disorders as well as women experiencing infertility, postpartum depression or whose children were in the care of the Children’s Aid Society.

Dr. Berk is currently a professor in the Bachelor of Behavioural Psychology program where she teaches courses related to human development, theories of counselling and interpersonal communication. Outside Seneca, Laura focuses on counselling adults and the parents of adolescents from an emotion-focused therapy approach with a key emphasis on making sense of one’s emotions to bring about change.

Laura Cavanagh is a mother, clinician, and professor of Psychology & Behavioural Sciences at Seneca College in King City, Ontario. She has a Master of Arts degree in Clinical/Developmental Psychology from York University, and extensive experience in clinical practice with various exceptional populations, including individuals who have experienced trauma, youth in foster care, and individuals on the autism spectrum. She is a Registered Psychotherapist with over twenty years of clinical experience, licensed by the College of Registered Psychotherapists of Ontario.

Professor Cavanagh is the Academic Co-ordinator of the Behavioural Sciences diploma program, which was launched at Seneca College in 2013. Professor Cavanagh is a co-author of the textbook “Essentials of Understanding Psychology”. She has taught at the college and university level since 2005. Her very favourite course to teach is Introduction to Psychology, where she gets to be an ambassador for this subject and introduce students to this fascinating field.

Mark is a military veteran and has been a member of the Seneca faculty since 1994. He is currently teaching in the Police Foundations and Advanced Investigations & Enforcement programs at King Campus.

Mark serves as president of Corporate Safety and Security Services where he provides consulting services for oil and natural gas facilities, airports and mass transit, nuclear power and water facilities as well as the commercial sector.

Mark has published two texts: Foundations of Law and Security Administration (2005) and Fundamentals of Security (2018).

Dr. Mark Tucci received his PhD in neuroscience from McMaster University where he studied the relationship between brain and behaviour, with a focus on pre-clinical models of abnormal behaviour. His psychological research has included work in obsessive-compulsive disorder (OCD), depression, addiction, autism, communication disorders and augmentative communication systems. He has published journal articles for several peer-reviewed journals, presented his research internationally and practiced behaviour therapy for a pediatric population. He continues to be involved in research efforts at Seneca through community partnerships and supervising student research projects. Dr. Tucci has a passion for teaching and mentoring students, hoping to inspire a curiosity in the brain and behaviour.

Dr. Murat Ozkan holds Master of Arts and Ph.D. degrees in criminal justice from Rutgers, the State University of New Jersey. For his doctoral dissertation, Murat examined neighbourhood level social environmental characteristics and their effects on creating crime risk. He worked with the Turkish National Police for 18 years as international trainer, curriculum developer, and project manager. He served as the liaison officer between the department and the US law enforcement. Dr. Ozkan's research interests include social and ecological context of crime, environmental criminology and crime analysis, evidence-based policing and criminology. He primarily teaches courses on research methods and statistics, criminology, policing and comparative criminal justice.

Peter is a professor in the School of Public Safety and Police Studies. He holds a master’s in public policy, administration and law from York University and a bachelor of applied arts in justice studies from the University of Guelph-Humber. Peter also has diplomas in public policy and administration from the University of Guelph and fish and wildlife technology from Sir Sandford Fleming College.

Before retiring as a staff sergeant, Peter worked with the York Regional Police for more than 30 years. During that time, he worked in the criminal investigations branch, case management, communications and technical collision investigation. As a collision reconstructionist, he was seconded as an instructor and assistant program co-ordinator by the Canadian Police College and was qualified as an expert in collision reconstruction on 34 occasions by all levels of the court in the Province of Ontario. Before joining York Regional Police, he worked for the Ontario Ministry of Natural Resources as a deputy conservation officer and fisheries technician.

For more than 28 years, he has been a volunteer with both Baseball Ontario and Baseball Canada, where he teaches officiating to volunteers.

Richard Norman is a full-time faculty member in the Crime & Intelligence Analysis (Honours) degree, Police Foundations, and Advanced Investigations & Enforcement program. Richard’s background includes 25 years as an intelligence officer with the Canadian Armed Forces specializing in counterinsurgency, east Asian organized crime and post-conflict development. In 2008, he served in Afghanistan as the chief targeting intelligence liaison officer with Operation Enduring Freedom. Richard has both a bachelor’s degree and a master’s degree from the University of Guelph and is currently pursuing a doctorate there focused on intergovernmental co-operation, counter-insurgency and post-conflict development. He has lectured and advised throughout the United States (US) on crime analysis operations, has sat on several policy writing boards for the US Department of Justice and has acted as an adviser to the US National Security Agency.

Dr. Sharon McCleave has been a faculty member at Seneca since 1999. Sharon has a BSc. (Hons) from the United Kingdom in osteopathic medicine, an MEd in adult education, and a cross-disciplinary PhD in the health and social sciences. Currently, Sharon is completing an MA in community music, with a focused interest on music as a therapeutic tool in the community setting. She was nominated for TV Ontario’s “Big Ideas Best Lecturer” competition, and won the annual “Best Female Pilot” award at the Brampton Flying Club. Sharon is happiest when she is in the classroom.